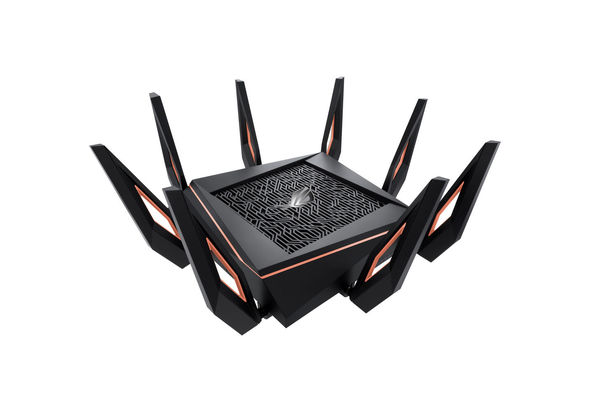 Compatible with ASUS AiMesh Wi-Fi routers, the ROG GT-AX11000 supports 4 x 4 multi-user MIMO, which allows the router to transfer data with multiple devices simultaneously. The router also supports a series of ASUS technologies that help to ensure gaming data packets are prioritized on the network.

Multi-User MIMO and OFDMA Technology
With a combination of OFDMA and MU-MIMO technology, 802.11ax technology provides up to four times greater network capacity and efficiency in traffic-dense environments. OFDMA divides each channel into small sub-channels, allowing signals from multiple devices to be bundled together and transmitted simultaneously, helping to reduce latency for a smoother, more responsive Wi-Fi experience. These sub-channels have a smaller bandwidth that enables them to travel up to 80% farther.

Target Wait Time
Allows the RT-AX88U to schedule designated intervals for devices to transmit data. This allows your devices to sleep when there is no need to wait for a router signal, reducing power consumption by up to a factor of seven.

Port Forwarding
Port forwarding helps to avoid the awkward situation of not being able to team up with friends. Open NAT on the GT-AX11000 takes only three steps: select which game to play, select your gaming device, then activate.

Game Radar
When it comes to ranking, a great connection to your game server is critical. Game Radar lets you check ping times to different servers before you play, so you can choose the best server and gain the competitive edge. Supported games include League of Legends, Overwatch, Dota 2, Hearthstone, Diablo III, Hero of the Storm, Garena LoL, StarCraft II, World of Warcraft, World of Tanks, and World of Warplanes.

Tri-Band Networking
Lets you dedicate one 5 GHz band to gaming, so you can avoid competing for bandwidth with other devices on your home network. With dynamic frequency selection (DFS), ROG Rapture GT-AX11000 also unlocks 15 channels in the least-congested 5 GHz bands, providing more bandwidth for all of your wireless devices.

VPN Fusion
Lets you run a VPN and an ordinary internet connection simultaneously, allowing you to enjoy maximum gaming speeds even if other network users need to use a VPN.