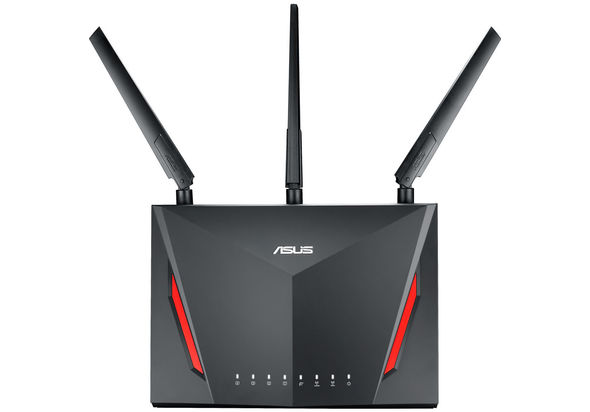 Ultrafast Wi-Fi with NitroQAM™ and 5GHz Quad-Stream Technology
Whether you're gaming online in a heated competition or streaming a live event in 4K UHD, lag and buffering are simply not an option. NitroQAM™ (1024-QAM) technology delivers the ultimate 5GHz quad-stream (4x4) speeds of up to 2167Mbps, giving RT-AC2900 combined total speed of 2917Mbps. So everyone on your network can enjoy smooth streaming and low-latency online gaming!

Free Game Accelerator Inside
Ping time and variance are critical technical parameters that affect responsiveness in online gaming, and their values depend heavily on the route game packets take to and from their destination. The Gamers Private Network® (GPN®) from WTFast® automatically performs route optimization, choosing the most efficient route for game packets, resulting in consistently-lower ping time and minimal packet loss. With RT-AC2900 this optimization is free for accelerating one selectable device at a time, so you can enjoy the results on supported competitive multi-player online games.

Adaptive QoS – Prioritize Your Game
Boost your gaming bandwidth with Adaptive QoS (Quality of Service), which allows you to easily prioritize gaming packets and activities. You can even assign full dedicated bandwidth while gaming under gamer solo mode, making RT-AC2900 the perfect ally for low latency gaming anywhere in your home. It supports major consoles including PlayStation®3, PlayStation®4, PS4™ Pro, PlayStation®Vita, Wii U, 3DS and Xbox One.

Multiple Capacity Wi-Fi with Revolutionary MU-MIMO Technology
MU-MIMO gives every compatible device3 its own dedicated full-speed Wi-Fi connection, so that multiple devices can connect at the same time without slowing down the network.
In fact, RT-AC2900 is able to connect to multiple MU-MIMO-compatible clients at each device's maximum speed simultaneously, unlike standard single-user MIMO where individual devices have to wait for sequential transmissions.

AiProtection
Your Digital Playground is Protected
RT-AC2900 incorporates ASUS AiProtection, a commercial-grade network security system powered by Trend Micro™ Smart Home Network. With AiProtection, all connected devices are protected, even if they have no antivirus capability of their own — such as IoT devices.
AiProtection blocks common internet-based attacks before they reach the network, and if an infected device is detected on the network, AiProtection instantly blocks it to prevent it sending any personal information to malicious servers.

Fortified Frontline Network Security
Networking is only half the equation when it comes to game performance. As AiProtection is integrated in RT-AC2900 and powered by the router, even if a device's security software isn't turned on — to get around blocked games, for example — AiProtection still protects the network from attacks and intrusions, for added peace of mind.

Powerful Whole-home Wi-Fi System.
The Way You Want.
In most cases, your RT-AC2900 can deliver smooth, reliable Wi-Fi to every part of your home. But Wi-Fi coverage can be affected by many factors — room layout, construction materials, and even furnishings. ASUS AiMesh is an innovative new router feature that fixes these problems: it creates a whole-home Wi-Fi network using multiple ASUS routers. AiMesh is powerful, flexible and you can use a mix of ASUS router models — protecting your investment! AiMesh gives you time-saving central control, and seamless roaming capability. AiMesh is Wi-Fi you can rely on — for all your devices, all the time!

ASUS Router APP
Control Your Network Anywhere
In your increasingly mobile-enabled life, having control over your network via an app is more important than ever. The new ASUS Router APP is built from the ground-up to be both intuitive and robust, all without needing to boot up a PC.

ASUSWRT
Easily Control Your Network
RT-AC2900 features the enhanced, intuitive ASUSWRT user interface, which gives you easy access to both the 3-step web-based installation process and a wealth of robust advanced options.

Your Sharing Center
With built-in USB 3.0 (USB 3.1 Gen 1) and USB 2.0 ports, you can connect USB-enabled devices, such as external storage drives, printers, or a 3G/4G dongle to your ASUS router and share them conveniently with other users via Wi-Fi. And with USB 3.1 Gen 1, you can enjoy up to 10X faster data transfer speeds.