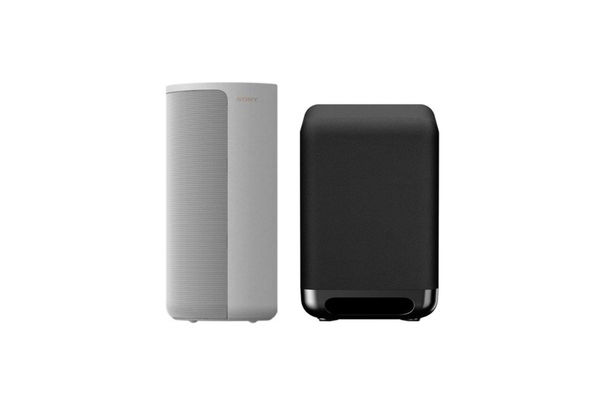 The HT-A9 home theatre system will transport you to a multi-dimensional audio experience.

360 Spatial Sounds
Sound Mapping technology adapts to your surroundings in 360 degrees. Sony's technology creates a significantly larger and more realistic sound field. Sound Field Optimization adjusts the sound in your room to create a listening experience that extends beyond the walls.

Flexible layout
The speakers on the HT-A9 are wirelessly connected to the control box, allowing them to be placed anywhere in the room.

Simple UI
The control box has an OLED front panel display to read the input sound mode or volume level easily. An on-screen user interface makes it simple to make slight modifications to your settings.

Immersion and effortless control
Select Sony TVs to feature an integrated UI that gives you quick access to all of your home entertainment system's functions. Acoustic Center Sync, which uses the TV to enrich and elevate the dialogue, is likewise included in the HT-A9.

A new frontier of surround sound
Immerse yourself in a multi-dimensional audio experience with the HT-A9 Home Theater System. Unique 360 Spatial Sound Mapping technology calibrates sound to your room for an environment that seems to expand beyond the walls.

See what experts at Sony Pictures think of our new sound
In this video, two sound professionals from Sony Pictures Post Production Services talk about their experience with the HT-A9 and how 360 Spatial Sound Mapping brings movies to life.

360 Spatial Sound experience, like you are in the scene
Surrounded on all sides by multiple phantom speakers within an optimized sound field, you’ll hear every flap of wing and gust of wind with incredible intensity. It’s like you and your living room are inside the movie.

Flexible layout for any situation
Reduce clutter and enjoy a simple setup without a need for extra cables. HT-A9’s speakers wirelessly connect to the control box, allowing you to place them anywhere in the room. Sound Field Optimization allows you to have the speakers at different heights and distances and will measure the position of each speaker to create the best sound for your room.

The SA-SW5 wireless subwoofer immerses you even further into movies and music, feel how real entertainment becomes with clear, thumping bass and subtle low frequency sounds.

Deep, explosive bass
With 300W of deep bass sound from a powerful 180mm driver and passive radiator, this subwoofer boosts the impact of everything you watch and listen to.

Omnidirectional Block Design
Our HT-A9 Home Theater System, HT-A7000 Soundbar and optional speakers have been designed under a common Omnidirectional Block concept. The design of the SA-SW5 is a perfect match for these systems. Its sophisticated rounded edges represent a single solid block providing wide-spreading sound. The combination of rich material textures emphasises an affinity with any living room environment.

Separated Notch Edge
Another Sony proprietary technology, Separated Notch Edge improves vertical amplitude symmetry, an essential for clear sound quality. It achieves this using concentric cuts on the edge, which help to control the stress inside and outside the edge of the diaphragm.

Easy to set up
Simply power up the SA-SW5 subwoofer and it automatically makes a wireless connection with your HT-A9 Home Theater System or HT-A7000 Soundbar. It’s quick and easy with no need for messy cables.