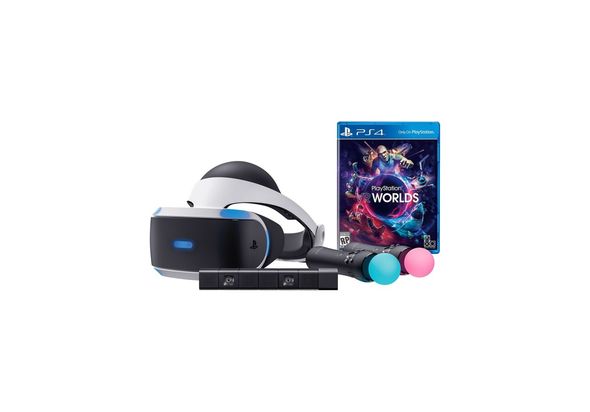 Live the game
Immerse yourself in extraordinary new worlds, put yourself at the centre of an incredible gaming universe and experience a new way to play with PlayStation VR.

Powered by PS4
PlayStation VR is the latest member of the PS4 family – so whichever PS4 console you own, you’re PS VR ready; connect the headset to your PS4, add a PlayStation Camera and leave reality behind.
*PlayStation Move motion controller and DUALSHOCK 4 wireless controller all sold separately.

360 degree vision
Whichever way you turn the 360 degree immersion of PS VR makes you part of a living, breathing world with a seamless field of view.

Play in new worlds
Embark on a PS VR platforming adventure with a courageous new hero in AstroBot: Resuce Mission, fight alongside your squad in tactical shooter Firewall Zero Hour, immerse yourself in an unforgettable mystery with Déraciné and much more.
New worlds are waiting for everyone with PS VR.

PlayStation Camera
With dual lenses and 3D depth sensors, the PlayStation Camera tracks the position of the headset, PlayStation Move controller and DUALSHOCK 4 light bar wherever you are, ensuring you’re always at the centre of your VR gaming universe.

Precision tracking
Nine LEDs positioned on the front, back and sides of the PS VR headset are tracked by the PlayStation Camera – ensuring pinpoint accuracy within the game world, wherever you are in the room.

PlayStation Move motion controller
Bring your hands into the game world and take full control of your VR experiences, giving an even deeper sense of presence and further enhancing your immersion.

PS VR videos and experiences
Go beyond gaming and into a new dimension with a range of PS VR experiences, movies and hundreds of videos from the world's leading channels and VR creators.