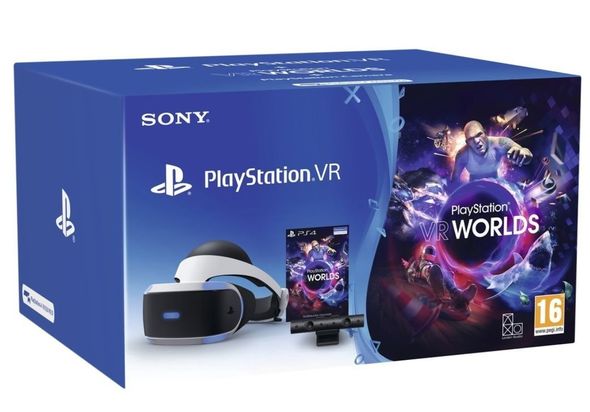 Write a Review
Go nose to nose with a great white shark, crawl through decaying space hulks, weave between oncoming traffic, or be part of a gritty London gangster thriller - all while sitting on your couch with the Sony VR bundle
SOLD OUT
Click - n - Collect
Find Nearest Stores
Free Delivery on AED 200 & above
7 Day Easy Exchange
Share
AED1,258.95
AED1,258.95
As low as AED 59 per month.

Sony Playstation VR Headset with Camera and Game Bundle
AED
CUHZVR2ECAM1GAME
Out Of Stock
1258.95
AED1,258.95
Playstation CUHZVR2ECAM1GAME
Live the game
Immerse yourself in extraordinary new worlds, put yourself at the centre of an incredible gaming universe and experience a new way to play with PlayStation VR.

Powered by PS4
PlayStation VR is the latest member of the PS4 family – so whichever PS4 console you own, you’re PS VR ready; connect the headset to your PS4, add a PlayStation Camera* and leave reality behind.

360 degree vision
Whichever way you turn the 360 degree immersion of PS VR makes you part of a living, breathing world with a seamless field of view.

Audio immersion
3D audio
Discover a new dimension in sound with cutting-edge 3D audio that lets you accurately perceive the direction and distance of sounds that are coming from above, below and all around you.

Built in mic
Chat to your online friends, discuss in-game tactics and strengthen your immersion in the virtual world with the headset’s integrated microphone.

Key Features
A huge breadth of content and game genres wonderfully showcases inventive VR design, best-in-class visuals and binaural audio soundscapes.
Features the full versions of the critically renowned VR experiences The London Heist, VR Luge and Ocean Descent, plus new game modes, VR World challenges and more.
Compete with friends in the living room and other players around the globe on the VR Worlds Leaderboards.
The variety of different worlds and the natural wonder of VR means everyone, from the casual player to the gaming veteran, has something new and vital to discover.