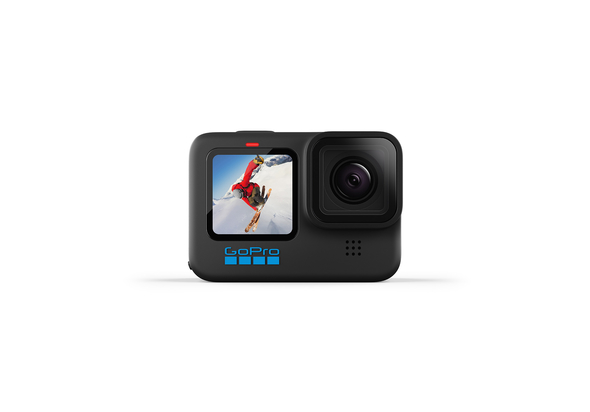 Enhance your video and image performance with GoPro Hero Black powered by the revolutionary new GP2 processor. You can easily get their contents stored on the cloud as soon as it is charged.

You can shoot the unreal with the low-light performance to capture the best visuals.

Improve images and videos with advanced stabilisation and horizon levelling to get crisp graphics.

Upload contents at 100% quality automatically on the cloud, and they can be easily shared and edited. Feel free to store unlimited data on the cloud.

The all New GP2 processor with the new engine will enhance the performance upto two times.

With ultra-sharp 5.3k video resolution and 19.6 megapixels, get ready to shoot the unreal.

You can record 45 frames in 1.5 seconds before and after with the LiveBurst function.

Speed with Ease
All-out speed and ultimate ease, now in the most powerful GoPro ever. Powered by the revolutionary new GP2 processor, HERO10 Black shoots 5.3K video with double the frame rate, 23MP photos, enhanced low-light performance and game-changing HyperSmooth 4.0 video stabilization in all modes. On top of all that, HERO10 is cloud connected—so the moment you charge it, your footage is automatically uploaded to the cloud.

23 Glorious Megapixels
Our best camera ever—capture stunning photos from places only a GoPro can go.

HyperSmooth 4.0
Our most advanced stabilization + increased horizon leveling from 27° to 45°.

Go big. Dive deep. Tougher than ever + waterproof up to 33ft.

Live stream directly from your GoPro in 1080p, now with HyperSmooth 4.0 stabilization.

Supercharged PowerTools
Hindsight captures up to 30 seconds before you hit record so you won’t miss a moment.

Set the time to record with Schedule Capture Now you can sleep in + get that sunrise video.

LiveBurst records 45 frames in 1.5 seconds before AND after your shot.

Duration Capture lets you select the length of time you want to record.